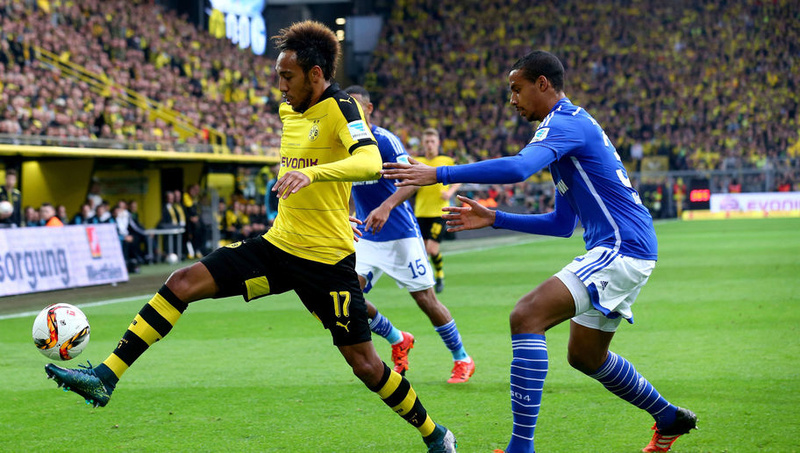 Schalke 04 vs. Borussia Dortmund
Borussia Dortmund travel to Schalke for their Matchday 26 clash on Saturday hoping to build on their 1-0 win over Ingolstadt and turn the Bundesliga derby match their way. Although they do look better at this point, as the win made it four in their last five outings with just one loss in the process, they’ve been far from convincing away from home recently and we don’t feel they can snatch all three points at VELTINS Arena.

Schalke come into the match on the back of a four-match unbeaten streak themselves, and although they have suffered a loss in a friendly against Hannover (3-1) during the International break we don’t feel their confidence will be dented. They’ve lost just one home match since mid-December, earning four wins and four draws in nine outings, and we’ll now back them to continue the streak with Double chance – Schalke to win or Draw which comes at a good-looking 17/20 with bet365.

Their loss at Hannover has indeed stressed their woes on the road, but we’ve seen them in very good shape at VELTINS Arena and with die Borussen struggling for consistency on the road throughout the season we do feel they can now hold them off.

BVB have earned just two wins in their last six trips away from home (0-3 at 3. Liga side Sportfreunde Lotte and 0-3 at Freiburg) with three losses and a draw also on the record. They have been regularly scoring goals, though, and with an in-form attacking line at the moment we’ll go for a Yes on Both teams to score at 4/7 with William Hill as well.

Schalke 04 vs. Borussia Dortmund Stats
We’ve seen just that in their last five head-to-head encounters at this ground as Schalke earned two wins and a draw, suffering two losses to their rivals in the process. The sides have met twice in 2016 and shared the spoils on both occasions, as we’ve seen a 2-2 draw in Gelsenkirchen in April and a goalless draw in Dortmund earlier this season.

We now expect another thrilling contest, but we’ll go for a 1-1 draw in the correct score market as it does seem the best value at this points, coming at 11/2 with BetVictor. 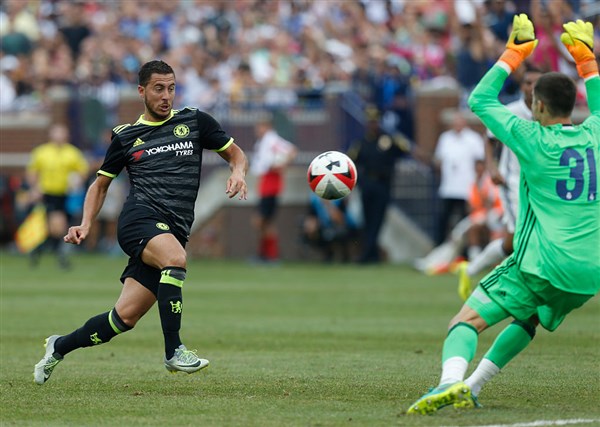 Crystal Palace are entitled to feel optimistic when they head across London, but ultimately this should be another hurdle Chelsea cross successfully on their way to the title.

A couple of months ago, when Palace were losing 4-0 at home to Sunderland, this would have looked a much more straightforward task for the champions-elect than it does now.

That is because the Sam Allardyce effect has finally kicked in, with the former England manager having led his side to three consecutive wins to nil over Middlesbrough, West Brom and Watford which have eased their relegation fears considerably.

And while plenty of water has flowed under the bridge in the meantime, the Eagles did triumph on their most recent visit to this venue at the end of August 2015 when Jose Mourinho’s second title-winning spell at Chelsea was just starting to unravel.

Chelsea's Eden Hazard (right) round the goalkeeper to score during a pre-season friendly match (Getty Images)
Some 19 months on, however, the Blues are now a much tighter ship and have cruised back to the level they were at two seasons ago with manager Antonio Conte the architect of the revival.

The clubs pursuing Chelsea are still vainly hoping for a late collapse but it looks increasingly unlikely to happen, for they keep grinding out the wins and it remains the case that only Liverpool back in the autumn have failed to prevent a home victory on this pitch all season.

What we do not expect here is a glut of goals because Big Sam has clearly now got Palace sorted out at the back, while Chelsea are also very solid and it would be a surprise if their defence came under too much pressure in this game.

It may only be settled by a solitary goal during the 90 minutes, but we find it difficult to see anything other than Conte celebrating wildly once more at the final whistle as his team edges closer to regaining the Premier League trophy.

None of the last 11 meetings of these clubs, all of them in the Premier League, has finished as a draw
Crystal Palace have the joint best away record in the bottom half of the table
Only six teams have scored more away goals this season than the Eagles 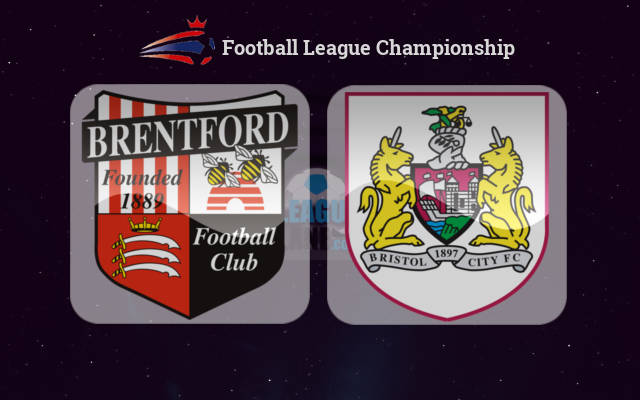 Brentford vs. Bristol City
Bristol City travel to Brentford for their Matchday 39 clash on the back of a 4-0 win over Huddersfield Town and a four-match unbeaten streak behind them. The Robins now surely hope to put on another great display and snatch the points at Griffin Park, where we’ll back them to earn a draw priced at 12/5 with Ladbrokes.

Brentford do have a convincing 3-5 win over Burton Albion behind them, but their struggles to achieve consistency have been obvious throughout the season. Furthermore, we don’t feel they’ll be able to build on it, as we’ve seen them lose on confidence with two consecutive losses at home (0-1 to Huddersfield and 1-2 to Wolverhampton) despite quite some success on the road.

While going for the draw does look the best way to approach the fixture, it seems needless to say Robins look better at the moment. However, their win over Wigan (0-1) on their last away day was only their first after six-game winless streak, and it’s a longshot to assume they can snatch all three points either.

We’ll also go for a Yes on Both teams to score at 8/15 with bet365, as we’ve seen both sides score a lot of goals recently and impress in the final third. The Bees have netted ten in their last five games, whereas Bristol bagged six in their last three, giving further evidence of great form and that we just might be for one of the most exciting clashes in Championship this week.

Brentford vs. Bristol City Stats
Brentford have earned four wins and a draw in their last five head-to-head encounters, building on their overall records against the rivals; as they’ve now got 13 wins, nine draws, and nine losses. However, Bristol have earned a 1-1 draw in their last game here back in April 2016 and we do feel they have what it takes to now repeat the success.

We’ll thus go for the same outcome, backing a 1-1 correct score prediction which does look the best option in the market at 11/2 with William Hill, hoping to see a similarly exciting clash 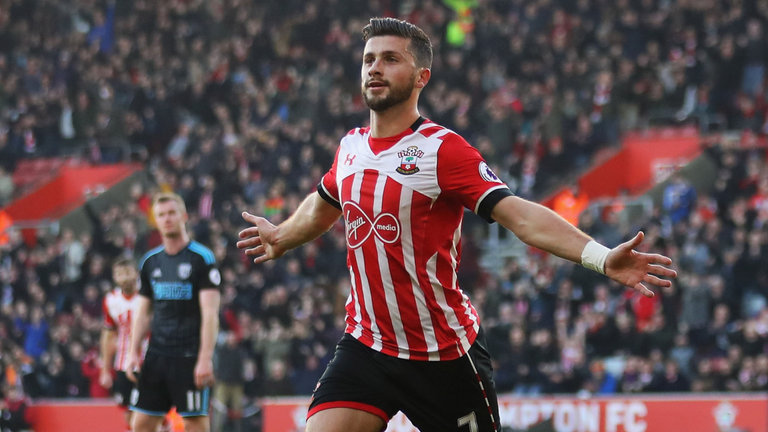 Southampton v Bournemouth betting preview
Southampton are battling to secure a place in the top half of the Premier League this season. The Saints managed to secure a place in the Europa League last term but perhaps their involvement in that competition, coupled with a run to the final of the EFL Cup, have distracted from their league campaign as they seem to have taken a step or two backwards this year.

Recent form has been mismatched as Claude Puel's men have lost four of their last seven games, but they have been against tough opposition in the likes of Manchester United and Arsenal in cup competitions and Tottenham last time out in the league. With the home advantage, they have the quality to earn the win that's expected of them here at 13/20 with William Hill.

AFC Bournemouth sit behind Southampton in the league table on goal difference alone. After a poor spell of recent form, supporters at the Vitality Stadium were no doubt worryingly glancing towards the relegation zone, but popular manager Eddie Howe as unsurprisingly managed to ease those concerns by leading his side to two wins in their last two games.

Both of those victories came in front of their own supporters against West Ham United and Swansea City and confidence seems to be back among the Cherries squad following those wins. After going down to their rivals Southampton at home earlier in the season, they'll head to St Mary's Stadium looking for revenge at odds of 19/4 with BetVictor.

We're backing goals in this game. Southampton have found the net in each of their last six matches but they've conceded 12 in that spell also. Both teams have scored in three of Bournemouth's last four matches and we fancy them to get on the scoresheet this weekend but the hosts to take all three points. The match result and both teams to score bet is priced at 9/4 with bet365.

With Manolo Gabbiadini out injured following a knock he picked up against Tottenham last time out, Shane Long will lead the line for Southampton in this game. The Republic of Ireland forward has the energy and pace to cause the Cherries backline problems in this game and we're backing him to get on the scoresheet at odds of 6/5 with Sky Bet as he looks to take advantage of this opportunity with Gabbiadini on the injury table.