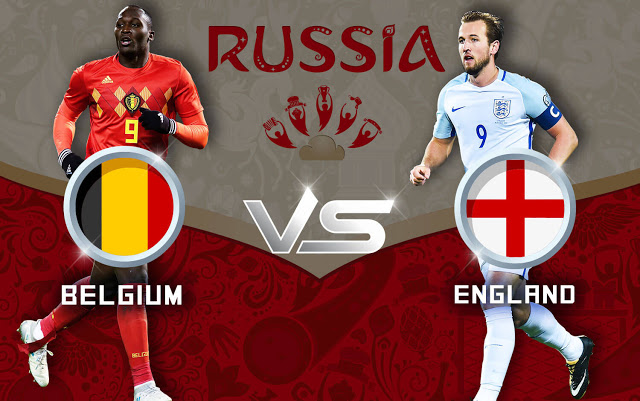 England’s World Cup title dream ended on Wednesday evening when Juventus’ Mario Mandzukic bagged the 109th minute winner from Croatia to send them into the first ever World Cup final on Sunday.
The Three Lions will feature the day earlier as they take on Belgium in the bronze medal game at Saint-Petersburg Stadium.

Belgium and England are set for the replay of their group-stage clash.
Unlike the case was in that match, Martinez and Southgate will line up the best they have aiming for the bronze medal at the World Cup in Russia.
Belgium expect Thomas Meunier back in the squad after the important winger missed the France tie in the semi-final due to suspension.

Belgium vs England Match Preview
Gareth Southgate and his men will be welcomed as heroes when they land on the British soil regardless of the third-place battle outcome, there are no doubts about it. They went to Russia without strong ambitions to go all the way to the semi-final.
The young Three Lions side got off to a fabulous start to the affair with Croatia when Kieran Trippier found the back of the net from a beautifully taken 20-yard free-kick with just five minutes on the clock. What an occasion in was for the Spurs’ man to bag his first ever international goal for England.

Such a fantastic opening to the game helped Southgate’s troops to be in full control in the first half, but they failed to capitalize on it as teams went on break with a minimal advantage for the English squad.
The momentum shifted entirely in the second half, especially after Inter’s Ivan Perisic brought his nation on level terms with just more than 20 minutes left to play. The same man fired right into the post four minutes later as the Blazers got in charge.
Finally, it was Mario Mandzukic who took advantage of the sloppy reaction from Stones, Maguire and Walker to send Perisic’s deflected header home with a beautiful finish in the fourth minute of the second extra-time.
Will Southgate find the way to bring his men up for Saturday’s third-round battle with the star-studded Belgian squad?

England will no doubts be in for a tougher rival here, especially knowing that the Red Devils will be stronger for super important right-back Thomas Meunier who is back after suspension to help his nation win the bronze medal.
Belgium vs England Team News and Predicted Line-ups

Belgium Team News
Roberto Martinez had huge problems on the right flank caused by Thomas Meunier’s suspension.
The PSG wing-back will be back in the squad here which will certainly improve Belgian chances significantly.
It will be interesting to see whether the Spanish manager will shift back to the formation he started the competition with (including Yannick
Carrasco and Dries Mertens in the starting line-up), or will he decide for a more conservative 4-2-3-1 he used against both Brazil and France.
Our assumption is that Martinez will use a 3-4-2-1 formation against England on Saturday.

Belgium Predicted Starting Eleven (3-4-2-1)
Courtois – Alderweireld, Kompany, Vertonghen – Meunier, De Bruyne, Witsel, Carrasco – Mertens, Hazard – Lukaku.
England Team News
Gareth Southgate had no issues with injured or suspended players as he used the same starting line-up to the one from both R16 and quarter-final.
The third-place clash might require some changes as Marcus Rashford and Eric Dier re main candidates to jump in.

Belgium vs England Head-to-head
England have a positive head to head record with Belgium in spite of losing the group-stage tie two weeks ago at Kaliningrad Stadium.
It was an affair which saw both Roberto Martinez and Gareth Southgate rest their main stars as Adnan Januzaj made the difference with an accurately-taken shot right after the interval.

Before the mentioned clash, it’s been six years since these two last locked horns. England won 1-0 in a friendly back in June 2012.
Overall, the Three Lions have three wins, two draws and two losses in seven games against the Red Devils.
Belgium vs England Predictions
They say there are no favourites in matches of this kind, but the bronze medal at the World Cup in football is a huge achievement and there are no doubts both sides will be super motivated to make it count in spite of recent semi-final defeats.

This is the golden generation of Belgian footballers, led by the Premier League stars Eden Hazard, Kevin de Bruyne and Romelu Lukaku as Roberto Martinez has much more quality and experience in his ranks compared to Gareth Southgate on the other side.

Belgium showed both mental and physical strength to come back from a two-goal deficit in the second half of the R16 clash with Japan.
They then went on to beat the five-time champions Brazil in the quarterfinal before losing only narrowly to star-studded neighbours France in the semis.
England had “black holes” in all of their knockout stage matches so far and we see the Red Devils as heavy favourites to pick up the victory here.

Belgium to win is a must-take bet at 2.30, while Belgium to finish third (including extra-time and penalties) is also well worth backing at 1.66. Finally, we’d not be surprised to see a 3-0 victory for the Red Devils. It can be backed at the incredibly high 23.00 odds.
Predicted Full-Time Result is a confident victory for Belgium who have much more quality and experience in their ranks.

Belgium to win third place (including extra-time and penalties) @ 1.66.